Who Puts “Muck” in Their Rum?

The Jamaicans do., but what is this stuff that makes the Jamaican Rums taste that is unique to many of the rums that are produced in Jamaica.

A “dunder pit” was essentially a hole in the ground, often deep in the jungle, that Caribbean rum-makers threw their distillery waste into—fruit, molasses, Stillage (what was left after distillation).
“Dunder pits look as disgusting as you’d imagine.”    Once the pit underwent bacterial fermentation, it becomes something they call “muck,” the distillers would put a portion of it back into their fermentation tank. By the end of the fermenting process, the gross scent of muck would be gone and the rum would come out smelling like a fruit basket. 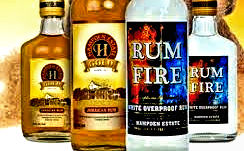 The Muck is the source of the esters that give the Jamaican rums their “funky” flavor that makes them so popular.  When you buy a rum from places like Worthy Park or Hampton Estates you will know what the muck really does for rum.
Posted by Bahama Bob's Rumstyles at 5:46 AM No comments: