48 Years ago some where in the area of 750,000 music loving "freaks" gathered together to celebrate great music and the freedom of the hippie lifestyle.  It was a music festival like no other and has never been matched since.  It was an epic event for those that were fortunate to have been there, and something that the rest of us can wish we were.  The poster tells it all, three days of the greatest musicians of the time in a concert that was suppose to be $6.00 per day, but the majority paid nothing as the slogged through the mud to get to the concert field.

The Woodstock Music and Art Festival was a rock music festival at Max Yasgur's 600 acre dairy farm in the town of Bethel, New York from 15–18 August 1969.   It is the most famous rock concert festival ever held. For many, it showed the counterculture of the 1960"s and the "hippie era".   Many of the most famous musicians at the time showed up during the rainy weekend, as can be seen in a 1970 movie, Woodstock.  Joni Mitchell's song "Woodstock", about the event, also became a major hit song for Crosby, Stills, Nash & Young.  In recent years, a number of attempts were made to recreate it, but the original Woodstock festival of 1969 has proven to be legendary.

The festival was called "Woodstock", because the investment group that backed the concert was called "Woodstock Ventures." It was originally planned for Saugerties, and then the Town of Wallkill, in Orange County . People in the Town of Wallkill, meaning those on the Town Board, quickly passed a law that required a permit to hold any gathering for over 5,000 people.  A permit was applied for, but it was denied because the portable toilets proposed were considered to be inadequate. A Sullivan County farmer named Max Yasgur heard about the festival and the problems and offered his farm in the Town of Bethel. He was paid $10,000 for the three days.

The municipalities were told there would be no more than 50,000, the organizers thought they would get as many as 150,000, and by best counts, there were more than three times that number over the three days. Most did not pay to get in, and the festival lost money as a result. The roads to the concert were jammed with traffic. People left their cars and walked for miles to get to the concert area. The weekend was rainy and overcrowded, and fans shared food, alcoholic drinks, and drugs. 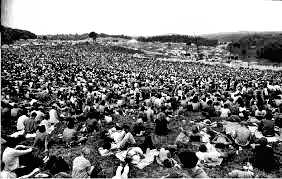 Posted by Bahama Bob's Rumstyles at 5:41 AM No comments: