Back in Key West, Great Trip, Glad to be Home

After eight days on the road it is great to sleep aboard Sanity Too again and my own bed.  It was a fun filled trip to Grand Cayman ant then off to Havana, in case you haven't guessed from the picture of the El Capitolia on Sunday.     It was a lovely trip that my wife and I thoroughly enjoyed.  Starting out in Grand Cayman and staying at the Reef Resort was great and then off the Havana on Wednesday for five days, then back to Grand Cayman for another two days before returning to Key West  yesterday.   This trip was great because there were so many things that I got to see that I have never seen before and a chance to return to some other places that I enjoyed so much last September.

Part of the fun of this trip was that I had my wife with me to share the experience. It is such a great thing to see the awe in her eyes as we moved around the amazing areas of Havana and the surrounding towns.    It was an opportunity to visit Cojimar, the fishing town where Pilar, Hemingway's fishing yacht spent a lot of it's life, and the La Terraza de Cojimar, the restaurant that Hemingway and his Captain Fuentes would eat and drink after fishing.

An evening at the Tropicana was very special as well  Seeing this historic cabaret night club right out of the Thirties blew me away.   Dinner and a 1939 style extravaganza cabaret show in the spectacular outdoor theater made for a pretty terrific evening.   Nights at La Floridita, and the recently reopened Sloppy Joe's in downtown Havana added to the color of the five day stop over. 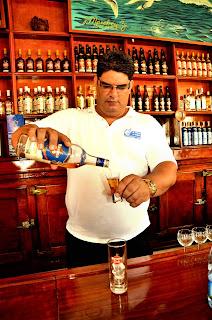 No trip to Havana would be complete without the chance to enjoy some very special rums of Cuba, and this trip was no exception.   Not only Havana Club, but Santiago de Cuba, and Ron Varadero.   I did run across a bottle of the no longer produced Havana Club Barrel Proof, that the gang of us immediately polished off at the La Terraza de Cojimar.  I kept the bottle, it will be on display at the Rum Bar today.

I will be covering in more detail the many stories of what happened on this extraordinary trip during the next month or so.  Keep your eyes out for some really fun things and places that we visited during our five days in Havana and four days in Grand Cayman.   ;o)
Posted by Bahama Bob's Rumstyles at 7:33 AM No comments: