Is This The Secret to Not Getting Drunk While Drinking?

I ran across these articles a few months back in Time and Esquire Magazines and though you might find it very interesting.  I'm always looking for ways to enjoy the flavors of my rums and be able to function in a somewhat normal manner.  This does make sense to me and it just might work for you.
The man behind Samuel Adams beer claims that ingesting dry yeast before knocking back a few cold ones can help keep you from overdoing it
Looking for ways to drink to excess without getting drunk may seem like a waste of time and money, but if your job requires lots of professional mingling over a good brew, you might want to listen to Jim Koch.
During an interview with Esquire, the billionaire Boston Beer Company co-founder and chairman revealed his secret for drinking all night without ever getting drunk: yeast.
Koch says he mixes Fleischmann’s dry yeast into yogurt to snack on before long periods of drinking, adding in one teaspoon of yeast per beer. Koch says he got the idea from friend and beer fan Joseph “Dr. Joe” Owades, who had a PhD in biochemistry and worked at the Fleischmann’s fermentation lab.
Yeast contains an enzyme, alcohol dehydrogenases (ADH), that breaks apart alcohol molecules in a similar way to how livers metabolize alcohol, Esquire reports. If the yeast is in your stomach when you start drinking, goes Koch’s theory, the ADH will begin to break down the alcohol before it gets into your system.
But the master brewer cautioned that his trick was no magic cure-all for inebriation. “It will mitigate — not eliminate — but mitigate the effects of alcohol!” Koch told Esquire.
There are already skeptics of Koch’s claim, who call the solution scientifically implausible and say there is only a short window of time for the ADH to work in this way, but Esquire’s reporter claimed the trick worked just fine.
“The older I get, the more of a lightweight I surely become, but after shoveling down six teaspoons and tilting back six bottles I felt nothing more than a little buzzed,” Aaron Goldfarb wrote. “Though I had no tangible ‘proof,’ besides the fact I was still awake, I was pretty sure I wasn’t all that drunk either.”
So does it work? There’s only one way to find out — but remember to yeast (and drink) responsibly. 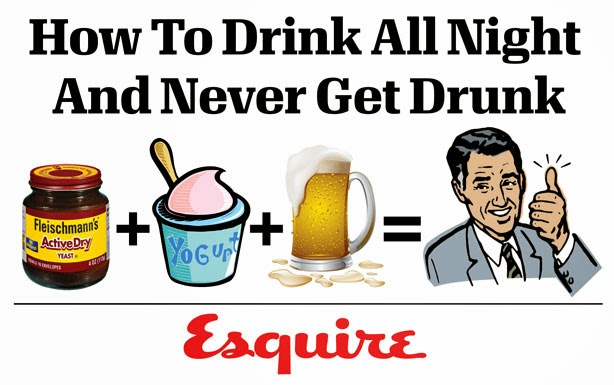 You can read the entire article from Esquire at http://www.esquire.com/blogs/food-for-men/how-not-to-get-drunk
You can read the Time article at http://time.com/78243/yeast-beer/
Both of these article are very interesting, but as the say it is not a cure all for drinking too much, but rather a method of allowing you to reduce the effect of the alcohol during long evenings of socializing.
I have not tried this yet, but I did find a paper on the subject at http://skeptics.stackexchange.com/questions/20381/does-eating-yeast-stop-you-from-getting-drunk
I don't believe it is something that will prevent you from becoming drunk, but it might slow the process a bit.  Note the article says "Beer" not 80 proof spirits.  ;o)
Posted by Bahama Bob's Rumstyles at 7:00 AM No comments: