There is a great recipe that comes from the mountains of Kentucky, North Carolina and Tennessee called Apple Pie Shine.   I've had several opportunities to enjoy this wonderful concoction on several occasions when I was living in North Carolina.  There is not any moonshine here in Key West, but my friend Nicolas Feris, importer of Rum Fire Overproof Rum has sent me a bottle to experiment with and I decided this would be a perfect fit for my Jamaican Style Apple Pie.  Give this a try, I think that you will enjoy it.  You might want to make more than just one quart, because it does disappear quickly. 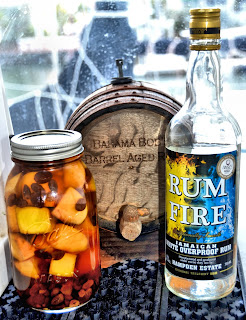 Cut up apples into medium chunks with core and seeds removed, but do not peel.  Put raisins and sugar syrup in jar first.  Put equal amounts of both kinds of apples in the jar filling to the top
Top the jar to the brim with the RumFire Overproof Rum, close tightly and shake.  Repeat the shaking daily until ready to be served,  It will be ready to drink in a week or so.  However, leaving it for up to a month or more will make better.   If you like it sweeter, add some of the simple syrup to sweeten to taste.   This recipe is for one quart, but you can multiply the recipe by as many quarts that you choose to make. use a Ball quart glass jar for the container.

Place the water and cinnamon stick in a pan and heat at 375 degrees until it boils, reduce the heat to 250 degrees and stir in the sugar until it has all dissolved.   Reduce heat to 220 degrees and allow to simmer for about 10 minutes.  Place in the refrigerator for about an hour to cool.  Pour into a mason jar.  Again, multiply this recipe by the number of jars that you are making.

Notes on Apples: A firm apple works best in this recipe. I like a mix between a sweet and sour apple.


Posted by Bahama Bob's Rumstyles at 5:22 AM No comments: