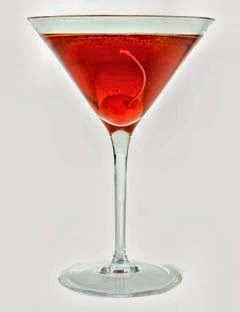 I love to look back on the old cocktail recipes from bygone eras and come up with new spins on them.  Today I ran across an old recipe for the "Rob Roy", a Scotch based cocktail that was very popular in that era.   The "Rob Roy Cocktail" was created in 1894 by a bartender at the famous Waldorf - Astoria in New York.    The drink was named in honor of the premiere of the operetta Rob Roy that was based on the Scottish hero Robert Roy MacGregor, a "Scottish Robin Hood" if you will from the 18th century.

While similar to the Manhattan, it was based on Scotch instead of Rye or Canadian Whiskey.   There were several versions of the Rob Roy circulating around in the Fifties.   There was a sweet, a Dry, and the "Perfect" Rob Roy recipes.   The difference being the type of Vermouth that was used.

I'm tending toward a dry version that is being made with Plantation Trinidad 2000 Rum.   The notes of Scotch that a apparent in the Plantation rum makes for a great marriage into the cocktail's original recipe.  There is an inherent sweetness to the rum that lends its self to the dryer versions of the original cocktail.

Bahama Bob's  Rum Roy
Place all ingredients in a shaker and shake until chilled, strain into a Martini glass and garnish with a lemon zest and a cherry.

Give this one a try, I think you will find it very satisfying.   ;o)
Posted by Bahama Bob's Rumstyles at 7:30 AM No comments: