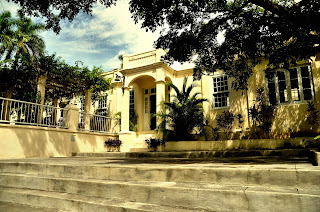 No visit to Havana would be complete without a trip of about 10 mile outside of Havana to San Francisco de Paula and the home of Ernest Hemingway.  The home he purchased in 1940 after living in the Ambros Mundos Hotel for approximately a year.    The home sat and fell into a state of disrepair for many years after Hemingway's death in 1961.  It had been taken over as the property of the state and sat for many years.   There have been a number of preservation groups that were able to help fund the restoration and get the personal effects of Hemingway so they could be viewed and enjoyed by the visitors.   The beautiful house and grounds where designed by Spanish architect Miguel Pascual y Baguer and purchased by Hemingway in 1940 for $12,500.00. 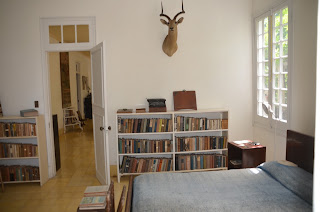 Many of the things that remain in the house really indicate how he lived and entertained.  The Swimming Pool, the patios, the tower, were all special places for Ernest to go and work out his ideas for his short stories and novels.  The room that he did his writing in, shows how the shrapnel that never was removed from his leg after World War I, was really beginning to bother him and he found it very hard to sit for any length of time, so he would stand in front of the typewriter and create his manuscripts.

There are beautiful dining rooms and an office where he would take care of the business, but in every room you will find his hunting trophies on the wall.    One of the curious items in his office was a rubber stamp that he had that said "I Never Write Letters ",  just one of the many quirky characteristics Hemingway had.     Up in the tower there was a telescope and another desk that allowed him to enjoy the view of Havana. and it was said that he would spend some time watch his female movie stars skinny dipping in the pool 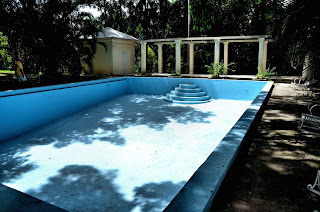 Just down the hill from the main house, there is a fabulous swimming pool.   This area is the grave yard for all of his dogs as well just to the right of the pool.   It was the only pool there in Havana at the time and not just some little toe dipping pool, but a real swimming pool.    Many of his guests would stop by and just hang out even though he was off fishing or something.   The pool made all of them really feel right at home waiting for his return.  There are terrace patios on the way down the hill going to the pool that were perfect for having afternoon cocktails and good conversation. 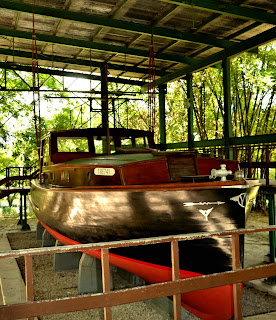 The real treat is when you get past the pool and meet up with Pilar.  This is Hemingway's famous fishing yacht that he and Captain Gregorio Fuente spent so much time on during his time in Havana.  Pilar spent a lot of time in the water in the little fishing village of Cojimar just to the east of Havana.  This is the village that became the basis of "The Old Man and the Sea" the story that is based on the times spent fishing and telling lies with the other fishermen of the village sitting around their table at La Terraza de Cojimar.   I was able to capture several old photographs of Pilar in the water at Cojimar, and pictures of both Hemingway and Fuente out fishing on Pilar down there in the Havana area.   This made this trip extra special when I got to see the rest of the fishing and the village where they would sit and drink and chatter with the local fishermen.  :o) 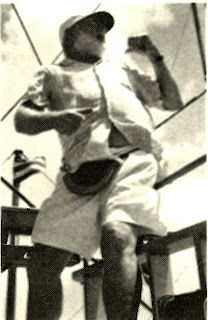 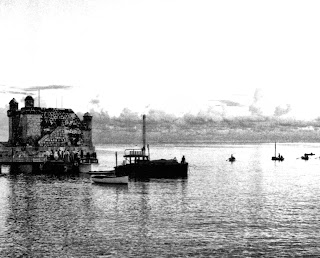 Posted by Bahama Bob's Rumstyles at 9:16 AM No comments: