Tomorrow 4 November, 2011 from 1 pm until 5 pm The Rum Bar Key West is featuring Ron Centenario 7 Year Old Rum in a special tasting event.      This is going to be a very special event featuring the Ron Centenario line of fine rums, plus a menu of $5.00 cocktails that feature Ron Centenario 7 Year Old Rum. These are all new Bahama Bob's Rum Lab Cocktails that were created especially for this Ron Centenario event . The best and the worst part of this is that it took some real work to come up with only 5 cocktails of this caliber because the rum fit so well into so many of the new creations.       A final Rum Lab this past Tuesday was charged with the duty to male sure of which ones we really wanted for this presentation.    One new recipe was added to the menu, but other wise the menu stayed the same as originally planned.

Lone Palm Tiki was added to the menu, because we felt that a Tiki theme cocktail would be ideal to showcase this particular premium rum in the Tiki inviornment. 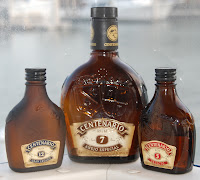 All of the ingredients except the Ginger Beer are placed in a shaker with Ice and shaken until chilled.   Strain into a pint glass filled with ice, top off with Barrett's Ginger Beer, and garnish with an orange and a sprig of mint.

Tomorrow is the big day for Ron Centenario at the Rum Bar Key West, so don't forget to stop by and try one of our new Premium Cocktails for only $5 from 1pm until 5 pm.
Posted by Bahama Bob's Rumstyles at 8:15 AM No comments: