The Veterans Day Parade here in Key West yesterday reminded me how much all of the veterans here in America owe to those that have given of their time and lives to the cause of freedom in America. 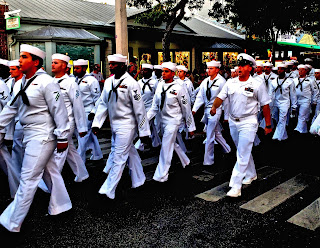 Veterans Day, once known as Armistice Day, was originally a U.S. legal holiday to honor the end of World War I.   Officially took first took place on November 11, 1918.  In legislation that was passed in 1938, November 11 was "dedicated to the cause of world peace and to be hereafter celebrated and known as 'Armistice Day.'" As such, this new legal holiday honored World War I veterans.   In 1954, after having been through both World War II and the Korean War, the 83rd U.S. Congress at the urging of the veterans service organizations, amended the Act of 1938 by striking out the word "Armistice" and inserting the word "Veterans." With the approval of this legislation on June 1, 1954, Nov. 11 became a day to honor American veterans of all wars.  In 1968, the Uniforms Holiday Bill ensured three-day weekends for federal employees by celebrating four national holidays on Mondays: Washington's Birthday, Memorial Day, Veterans Day, and Columbus Day. Under this bill, Veterans Day was moved to the fourth Monday of October. Many states did not agree with this decision and continued to celebrate the holiday on its original date. The first Veterans Day under the new law was observed with much confusion on Oct. 25, 1971. 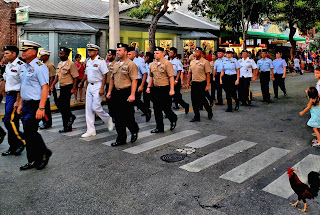 On September 20, 1975, President Gerald R. Ford signed a law which returned the annual observance of Veterans Day to its original date of Nov. 11, beginning in 1978. Since then, the Veterans Day holiday has been observed on Nov. 11.  With that new law, we still to this date, America celebrates Veterans Day on November 11th.  Happy Veterans Day and a big Thank You to all of those Veterans that have served America in one of our military services.

Posted by Bahama Bob's Rumstyles at 5:08 AM No comments: