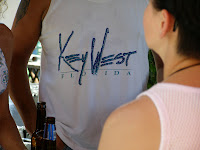 Old Town Key West is one of the fun capitals of the world.     This tow has the largest number of bars per square mile in the world, so the stories go anyway.      If you happen to get the chance to stop in and have a little fun with us down here in the southern most city in the United States, you will not regret it unless you try to hard.     This city boasted such legends as Hemingway, Silverstein, and Truman, yes President Truman had his "Little White House" here in old town.     You can bask in the sun and party in the bars and even attempt the fabled "Duval Crawl", a favorite of the cruise ship guests.      All you have to do is have a drink at each of the bars on the west side of Duval Street starting at the Gulf and when you get to the Atlantic turn around and start working your way back to the Gulf.     Most are crawling back to their ships without hitting many of the bars on the return. 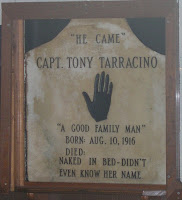 We are approaching the birthday of the late Captain Tony Tarracino.     Captain Tony is one of Key West's true legends, from his days as a fisherman to Bar owner, to even Mayor of Key West.     The location at 428 Greene Street has a checkered past as an Ice house in 1890's, a cigar factory in 1912, the Blind Pig, a speakeasy specializing in women, gambling and "Hoover's Gold" (bootleg rum) during prohibition.

428 Greene Street reopened as the Duval Club, a Victorian decorated predominately gay night club owned by an openly gay man named Morgan Bird.    The Duval Club was know for lavish gay parties and prospered until the Navy issued an "Off Limits" order that reduced his business some 80%.

Captain Tony  made his appearance in Key West in 1948 an in 1958 Tony opened Captain Tony's in its present location.    This little saloon soon became the hangout for many locals including many celebrities like Tennessee Williams, Truman Capote, who was known to charge the men's room swinging a purse which go him beaten by the sailors quite often, Presidents, Harry S. Truman and John Kennedy, Elizabeth Taylor and Robert Frost.     Jimmy Buffett as legend would have it play there for $5.00, tips, and a 6-pack of beer.     Jimmy as we all know went on to some notable fame and dedicated a song and an album to Tony and his bar. 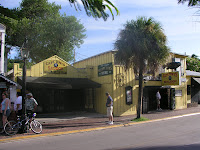 Captain Tony's has a tree that is still alive and growing through the roof of the saloon that 17 pirates were hung by vigilantes in the 1800's.     With his famous slogan, "All you need in this life is a tremendous sex drive and a great ego, brains don't mean shit",  he became mayor of Key West by 62 votes and kept his promise to keep Key West like it was "Key West is an insane asylum.   We're just too lazy to put up walls and fences.    I just want to maintain that mystique."

This fabled saloon still exists today with all it's frolic and frivolity, this is a place you just don't want to miss.
Posted by Bahama Bob's Rumstyles at 9:35 AM No comments: Links to this post