Rumstylin in Key West at the Speakeasy Inn 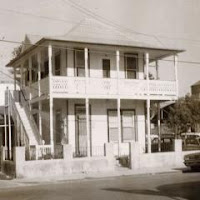 Key West during the prohibition era was a bastion for illicit importation of liquor.     These smugglers known as moonshiners,racketeers, rum runners, or keepers of "dives" and "blind pigs" were an important part of the Key West economy of the era.   These felonious characters  were a part of the everyday color that made Key West the crazy city it is today.     One of the more interesting marauders of the time was Raul Vasquez.     Born in Tampa on August 21, 1890, he came to Key West as a child and learned the trade of "cigar selector" and worked at the Gato Cigar Factory.     At the age of 21 he married Concepcion Magrinat Pellon from the Canary Islands.     Together they had a daughter Mary Onella born on March 1, 1920, known today as Mrs. Ernest Betancourt, who til her retirement taught music at the Convent of Mary Immaculate. 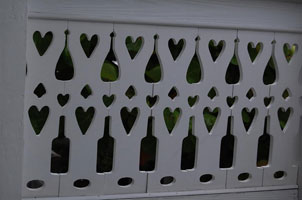 Raul set out to establish his importing business, with the support of the Cuban underground of the era.     He was a friend of Fulgencio Batista , who lead the revolution in 1933.     Raul purchased this home in 1920 and setup his speakeasy in the back .     The club know as the "Florence Club" , was a successful and popular club named for many of his patrons with wives named Florence.     Not able to advertise in a normal manor and unlike some of the other owners who would use a simple sign that read "club in the rear" Raul came up with a unique way to promote his speakeasy.     Like today it is not a large place, it had eight chairs and one large bench ( the bench was out on Duval Street as a convenience to the people waiting for the electric street cars of the era.)    On one trip from Cuba, Raul brought back his elaborately carved balustrade made in Sagua la Grande, Cuba.   These poinent that advertisements adorn the porch even today at 1117 Duval Street  Speakeasy Inn.. 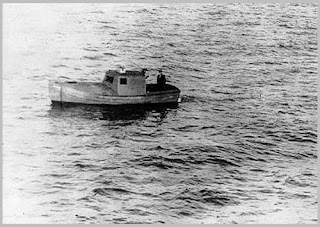 Raul was away much of the time, but the Florence Club had an honor system, he had a large white marble slate that the patrons would write what they drank and at some later time Raul would settle up with them.     Raul swore that nobody ever stole from him during those days.     Raul had many rubs with the law, but they all seemed to be something like a story from Andy Griffin and Mayberry.     He is fabled to have his own key to the jail so he could return from his "work release" program at night without having to wake up the jailer. 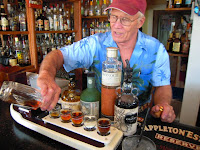 Today those days are recalled in the Rum Bar at the Speakeasy Inn, where you can take a "Rum Run" on a replica of a "black boat" (rum flight if you will) from the era, or just  relax with one of the 200 plus rums on the front porch and watch the traffic of tourists and trolleys going by.     By the way if you hadn't guessed by now, this is the bar that I'm employed.     You can find me on Wednesday through Sundays behind the bar from 11am til 6pm telling tales and sharing good rumstylin times with my new and old friends.     ;o)
Posted by Bahama Bob's Rumstyles at 10:00 AM 1 comment: Links to this post