The Blender Party in Kissimmee 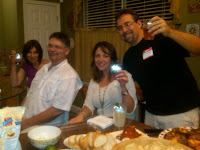 I'm sorry that I had to work and couldn't get up to Kissimmee on Saturday night for the annual Blender Party at the Figarts.     This is one of the rumstylin' great parties, you bring your unique blender recipe and go!     The drinks are shared by all and the winner is chosen by those still cognizant at the end of the night.   It all begins in the kitchen where all the necessities are gathered for the "blend-off" and let the party begin.

It all got underway with some fresh pineapple Pina Coladas, made with home-made creme de coconut ( condensed milk, coconut grated in heavy syrup, and coconut milk) cane rum, and fresh pineapple, it was labeled as "Pina Bliss".     This was definitely in the running to be a winner.     This is just the beginning of the craziness, next we had " Skinny Bitch Margaritas, "tasted like toxic waste".    We then moved on to Cucumber Mojitos", by the second batch, they began to taste better, and I guess that if you kept on drinking them they would become a winner, but that didn't happen , they didn't win either.     " Jason's Own  Root Juice" was inaugurated the same night and was drunk to rave reviews.   Way to go Jason!!!    Several of the invitees were caught in other unfortunate commitments that didn't allow their appearance at the event, but that usually means that they were just "sceered".

The party moved on through the night and into the morning and the blender really didn't stop for very long, cranking out the latest concoction for the waiting palates of the judges.    By the way if you drew a late turn at the blender, your drink would probably have a better chance of winning because the judges were getting less able to be critical as they finished tasting another entry.     When it was all said and done the "Honey-Bunny" (a secret recipe) was the winner!    Yeah!!!!!!!!!

There should have been trophies for all involved because there were few standing when the judging and blending was completed.     The picture of the party tells of how everything sort of got blended together and nothing was very clear.     I'd have to call this a very successful rumstylin' party in anyone's eyes.    Way to go Figarts!!!!    Don't forget to give me some notice so I can be there for the next one.     ;o)
Posted by Bahama Bob's Rumstyles at 10:29 AM No comments: