﻿﻿
﻿﻿
﻿ ﻿      Prichard's Distillery of Kelso, Tennessee is a true American rum producer.      In addition they produce some of the finest award winning  bourbon anywhere, "Benjamin Prichard's Double Barrel Bourbon".     This distillery's linage can be traced back five generations when "Grand Daddy" Benjamin Prichard of Davidson County, Tennessee was making a sugar and white corn spirit.    The still, tubs and the utensils were passed on to his son Enoch in his will of 1822.     This is the documentation of the last known "legal" distiller in the Prichard family.     The Prichard's Distillery today is a collaboration of many people that wanted to become a part of the first legal still in Tennessee in nearly 50 years.      Operations began in 2000, when the company finally received sufficient capitalization. 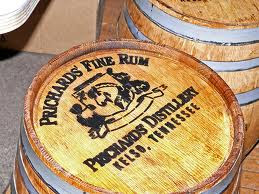 The art of making small batch rums is one that is not easy to learn.     Phil Prichard's passion for making spirits show through in the fine product that the distillery produces.     He has chosen the finest of ingredients including molasses from Louisiana and  his own private stock yeast and the pure Tennessee spring water.     When fermentation is complete it is distilled in a copper pot still and aged, and bottled all at the Kelso, Tennessee operation.       Even with the availability of bourbon barrels in the Tennessee area, Phil chooses to use new 15 gallon barrels for his rum.     This gives the rum a maximum favor and it is what gives the rum it's very unique flavor.

This true American rum is in name only, because once you have tasted this fine rum you will have to believe that it was born in the Caribbean and not int he hills of Tennessee.       Phil has recreated the almost lost traditions of a Tennessee spirits producers from the earlier generations.     The attention to detail and the rigid standards that are adhered to in the production and aging of the rum is apparent in the wonderful flavors.      We have had this "Prichard's Fine Rum" along with two if the sister rums, "Prichard's Key Lime Rum" and Prichard's Peach Mango Rum" at the Rum Bar here in Key West for about a year now and it truly exhibits the superior skills of Phil Prichard and his people at the Prichard's Distillery.    ;o)
Posted by Bahama Bob's Rumstyles at 9:28 AM No comments: