﻿ ﻿      The oldest continuously operated pot still in the world, having been in operation for more that 200 years.     Their rum is brewed from sugar cane juice rather than molasses.     This method according to Michael Callwood, current proprietor, is the best to produce a pure authentic rum.     Many claims of the medicinal properties of this style of rum, but there is not a shred of scientific proof that these clams are true.      The exact age of the distillery is not known, but based upon the architecture of the buildings it is thought to be from the mid 1700's.     The Callwood's have owned the distillery since the late 1800's and today it is still being operated by the Callwood's.

﻿ ﻿      The distillery is an operating museum of rum distillation with the demijohns, large glass bottles used to store white rum, the oak barrels used to age the amber rums, and the old burned out still in the store.     You can buy a bottle of Arundel Rum at the distillery, of which I do have one in my collection, or just taste it there in the distillery .     The collection of relics and the rum making operation seem to be one of the same.     Have seen some of the most modern of the rum distilleries, it is refreshing to go back in rum history and see the art of rum making being done in the old traditional way. 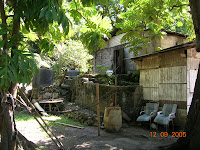 Richard Callwood, a buccaneer from the 1800's, and owner of Little Thatch Island, bought the Arundel Estate on Cane Garden Bay for his son Richard, Jr.     The Estate is where the distillery is today.     Michael Callwood is a fourth generation Callwood to operate the distillery.     The next time you visit Cane Garden Bay, Tortola, British Virgin Islands, this is a must see for the true rumstyler.        Be sure and taste the rums especially the oer proof that is straight off of the stills.     ;o)
Posted by Bahama Bob's Rumstyles at 11:13 AM No comments: Links to this post