Today is the Big Day of Fantasyfest 2011 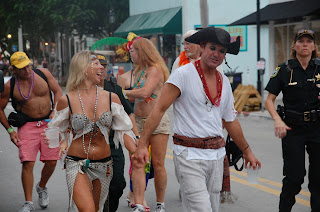 Tonight is the Captain Morgan Fantasyfest Parade here in Key West.   The week of craziness and debauchery is coming to an end at last.    Don't know how much more of the insanity the people down here can handle.     So far it has been a wild week  with everyone having a great time running from party to party and just hanging in the streets.     Yesterday the People's Parade brought a large number of costumed people into the street for a march from the cemetery to the downtown area.

The costumes following the theme of "Aquatic-a-Frolic" have produced some fantastically creative ideas and designs.     Tonight the parade promises to be equally as exciting and creative.    There is a lot of excitement among the participants and the tourists for tonight's parade and the frolicking good time that always goes along with the parade. 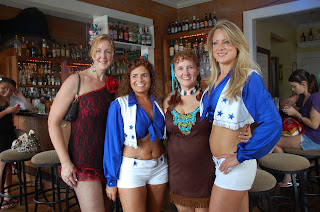 Today and tonight the Rum Bar like most of the other bars up and down Duval Street will be having the annual parties that make the parade so much fun.    There are also many private parties from the upper story residents along the parade route that go on and on and on into the wee hours of the morning.     No matter where you are for this event, whether it be sitting on the curb, up in a suite on on the balcony, this event is one you won't quickly forget.    Be Safe, and have a great time tonight all.     ;o)
Posted by Bahama Bob's Rumstyles at 7:10 AM No comments: Links to this post