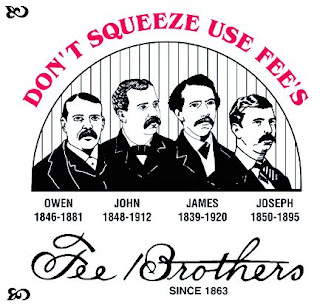 The spirits and juices are all very important to a cocktail, but you need the "Salt and Pepper" of cocktailing to put that finishing touch on the product.   This is where Fee Brothers and their line of fine products come into play.    The four brothers started out in the wine business.   They made their own wine as well as importing European and California wines to the liquor store in Rochester, New York.     The also handled various brands of liquor that were mostly stored in wooden barrels in the store.

During the prohibition era Fee Brothers continued to make altar wines, something that was legal to produce and was sold throughout the United States.    The brothers would travel out to individuals homes and set up a barrel with grape concentrate,water, sugar and yeast to make wine, then return a few months later to check on the progress of the wine.    They also made a non-alcoholic beer, that was labeled with "do not add yeast to this product as it is likely to ferment", kind of a creative way around actually producing ans alcoholic beverage.    Most of these were mad by in experienced people and really didn't taste very good, so Fee Brothers began to produce flavorings and cordial syrups to overcome this problem.

After Prohibition, the Fee Brothers found that the wine and the Cordial syrups were the real profit items and moved  the direction of the business in that direction.     This appeared to be the right direction because the Fee Brother's operation sells their 80 plus products world wide and is one of the most well known by bartenders and cocktailers as well.

The use of the Fee Brother's line of products in the bar is like the spice cabinet is to a chef, these products add the personal touch to all of the cocktails.    They make syrups, bitters of all flavors, and flavored waters that all are there to raise your cocktail's flavor to a new level.    Try this when you start your next gathering and see your guest's eyes raise as the try your enhanced cocktails and beverages.    ;o)
Posted by Bahama Bob's Rumstyles at 8:28 AM No comments: Links to this post