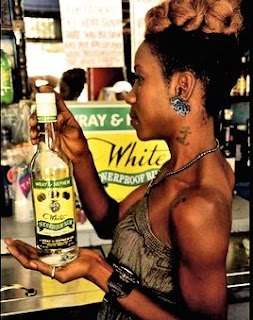 A story in the Jamaica Gleaner reveals that bootleg rum carrying  J. Wray & Nephew White  Overproof labels was making it's way into several bars, stores, wholesalers, as well as other places throughout Kingston.     The Sunday Gleaner has found the bootleg rum widely available especially in bars and shops during it's investigation over the past three months.     This has been a problem before in Jamaica, and has come to the surface again.   There are several parts for concern over this latest outbreak.   Health concerns over  this rum that is being distilled in less than sanitary conditions, the financial impact of the bootlegging.

From a sanitation standpoint, the bottles are used bottles that have not been properly sanitized and being resealed with glue.  The stills themselves are not inspected as well as the rest of the facilities to see if they meet the required standards.    All of these things can be a source of problems for anyone that is using these bootleg versions of the rum.    There have been some reports of diarrhoea and other symptoms reported from the drinking of the bootleg rum, but the full effects from the ingestion of these rums is unclear at the is time.

The financial losses not only effect the J. Wray & Nephew Company, but the taxes are not being collected on these bottles costing the Jamaican Government millions each year.   It is conservatively estimated the bootleg rum sales at $100 million annually, and the legitimate industry leaders are feeling the they are becoming more organized and sophisticated in their methods and distribution.

Most of the current confiscated bottles are bearing the J. Wray & Nephew White Overproof Label, and the company says that most of the customers who are purchasing this bootleg rum won't be able to tell the difference.   This is because even some of the new security additions to the label are found on the counterfeit ones.    The trail back to the people that are making the rum is very unclear, there have been several arrests of store owners that are selling the bootleg rum but getting back to the source has been sketchy.     Major Hugh Blake , corporate risk manager of Lascelles Group who makes Wray & Nephew says the counterfeit trade has been dented in recent years leading to nearly 90% of the rum on the market being rum from legitimate producers.

I guess it is not that different from the bootleggers in the South here in the United States during the 40's and 50's, it is hard to find the stills and even harder to catch the delivery people.    I think that the real concern for the Jamaican Government is one of revenue loss and some small health concern.   It needs to be nipped off, before the organizations become too deeply rooted and they become nearly impossible to get rid of.   ;o)

Posted by Bahama Bob's Rumstyles at 12:32 PM No comments: Links to this post