The most predominant building in Old Havana is the Bacardi Building or Edifico Bacardi as it is called in Havana.  This is probably on of the best examples of Art Deco architecture anywhere.   The exterior and the interior of this magnificent building is really hard to describe.   The detail of the finish work is nothing short of spectacular.   it is truly a monument to the Bacardi empire of the 30's.

﻿
Designed by architects Esteban Rodriguez Castells, Rafael Fernandez Ruenes, and Jose Menendez, it is the largest and arguably the most impressive structure in Old Havana.   Architect Esteban Rodriguez Castells originally won the competition for the construction of the building with a neo-renaissance design, but later revised the design to an Art Deco style after visiting the 1925 industrial modern art exposition in Paris.   The 12 story building  was completed in 1930.

The lavish decorations of the facade are constructed of Bavarian Granite with inlaid brass embellishments including  an art deco stylized version of the Havana coat of arms.   The upper building is faced with glazed terracotta reliefs with patterns of flowers, and female nudes created by Maxwell Parrish.  The blue mirrors, stucco reliefs; brushed and polished brass; mural paintings; mahogany and cedar paneling; stained and etched glass; gold leaf and rose colored, pale green and black inlaid marble from Germany, Sweden, Norway, Italy, France, Belgium, and Hungary all make up the sumptuous interior details of the Edificio Bacardi.  The lamps and the other fittings throughout the building are classic examples of the Art Deco style

The upper tower is crowned with a three dimensional statue of the famous Bacardi Bat.   This is a real appropriate crown for the building that stood for everything rum when it was constructed.

After the Cuban Revolution  and the departure of Bacardi from Cuba, the building became an office building.  The Office of the City Historian of Havana began the restoration of the Edificio Bacardi at the end of the 1990's and it was completed in 2003.   Today there is still some signs of more restoration going on throughout the structure. 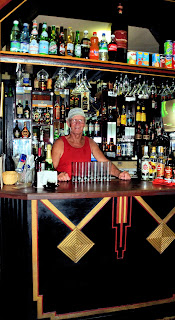 On the mezzanine floor there is an operational bar that clearly has some of the most beautiful wood work that I've seen anywhere.    It was a pleasure to be able to go and stand behind the bar and picture life of the fabulous sumptuous living style within the Bacardi Building.    The ironic part of the whole the bar was that the rum served in the Bacardi Building mezzanine bar was Havana Club.

This is a king sized don't miss when you do get the chance to visit Havana and the rest of Cuba, hopefully in the very near future.   ;o)
Posted by Bahama Bob's Rumstyles at 7:12 AM No comments: Links to this post