Fat Tuesday: Where Does it Come From? 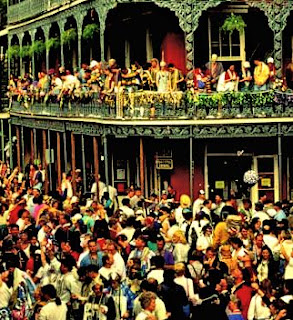 Mardi Gras, literally "Fat Tuesday," has grown in popularity in recent years as a raucous, sometimes hedonistic event. But its roots lie in the Christian calendar, as the "last hurrah" before Lent begins on Ash Wednesday. That's why the enormous party in New Orleans, for example, ends abruptly at midnight on Tuesday, with battalions of street sweepers pushing the crowds out of the French Quarter towards home.


What is less known about Mardi Gras is its relation to the Christmas season, through the ordinary-time interlude known in many Catholic cultures as Carnival. (Ordinary time, in the Christian calendar, refers to the normal "ordering" of time outside of the Advent/Christmas or Lent/Easter seasons.


Eventually the French in New Orleans celebrated Mardi Gras with masked balls and parties, until the Spanish government took over in the mid-1700s and banned the celebrations. The ban continued even after the U.S. government acquired the land but the celebrations resumed in 1827. The official colors of Mardi Gras, with their roots in Catholicism, were chosen 10 years later: purple, a symbol of justice; green, representing faith; and gold, to signify power.


Read more at  http://www.americancatholic.org/features/mardigras/
I found it very interesting reading and I hope you take the time to go through the entire article, it sheds a lot of light on the celebration.   I find it very interesting that one of the most raucous party's in the world has its roots in the Catholic Religion.
Any way, have a great Fat Tuesday and celebrate it in your own fun way.  ;o)
Posted by Bahama Bob's Rumstyles at 8:30 AM No comments: Links to this post