Louisiana Spirits  of Lacassine, Louisiana has made public the first two expressions of their rums.  There is a Silver and a Spiced rum available now, in addition an aged one coming soon.    Trey Litel, President of Louisiana Spirits said, "Bayou Rum uses 100% Louisiana sugar and molasses and uses a "Sugar House" recipe to create the rums."   The recipe is based upon an early 1800's distilling that took place in the Louisiana sugar plantations of the era.   The addition of raw unrefined sugar to the molasses smooths the rum emerging from the pot stills.   Litel says that the taste compares to Dominican Republic rums, in that it has a fuller flavor that light industrial silver rums. 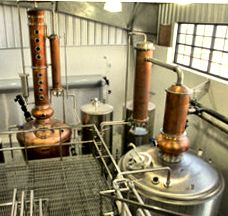 Having grown up on Contraband Bayou, many good memories have inspired the group to celebrate the state and their childhood by naming the rum "Bayou Rum".    The rum is first being introduced in its native state of Louisiana an then off to Florida and other states for their chance to taste these rums.   Jeff Murphy, Head Distiller said that they were aiming for a great tasting rums to be
come a part of the internationally known Cajun culinary culture, and this starts with local ingredients.    It has been found that the fresh local ingredients are a significant factor in the taste of the rum.     This combined with the "Sugar House" recipe is responsible for these more flavorful rums.

It is the desire of Louisiana Spirits to recapture the historic role of Louisiana as a sugar cane rum producer making use of the availability of raw materials from the second largest producer of sugar cane in the United States.  This has also had a very positive economic effect on the area producing many new full time jobs and opportunities for all connected to the farming of the sugar cane.

Produced in the largest privately owned rum distillery in the United States, utilizing the most modern state-of-the-art technology in all phases of the rum production.   This plant also offers tours of the facility, a tasting bar and a gift shop for your pleasure.

This place is like a mini theme park that you need to visit if you are in the area.  Take some time to taste these wonderful American Rums.  ;o)

Posted by Bahama Bob's Rumstyles at 7:57 AM No comments: Links to this post