The First British Rum to be Distilled from African Molasses

Matugga Rum is thought to be the first rum to be distilled in the UK from African molasses
Currently available in two expressions, Matugga Golden Rum and Matugga Spiced Rum, the Matugga Rum brand officially launches in the UK as part of London Rum Experience Week (12-18 October). 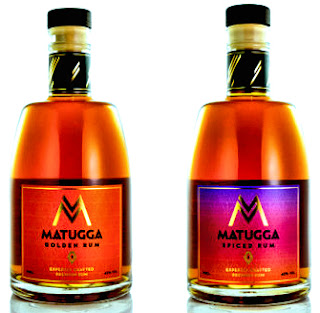 Master distiller, John Walters, produces the small-batch rum in Cambridgeshire. Molasses from East Africa is fermented for seven days, before being triple-distilled in 200-litre copper pot stills with swan neck condensers. With each round of distillation the heads and tails are cut. The rum is then finished in uncharred oak casks.
Husband and wife team Paul and Jacine Rutasikwa co-own Matugga Beverages. The pair own family land in Matugga, a town located 13 miles north of Kampala, Uganda’s capital and largest city.   Paul Rutasikwa, co-founder of Matugga Beverages, said: “The naturally rich, red soils of East Africa provide an ideal terrain for high-quality sugar cane, from which we source the finest molasses. We are proud to be promoting East Africa’s incredibly rich natural produce while showcasing British micro-distillery craft at its best.
“Consumers are becoming more attuned to carefully crafted, artisan sprits. In addition to quality and taste, their focus is very much on how the ingredients are sourced and, importantly, how they’re handled afterwards. It matters to them and it matters to us.”
Read more at http://www.thespiritsbusiness.com/2015/10/first-british-rum-to-use-african-molasses-launches-in-uk/
Posted by Bahama Bob's Rumstyles at 7:00 AM No comments: