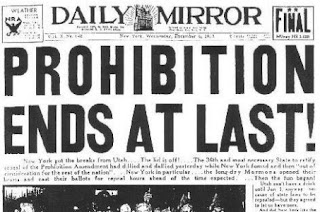 We bring this day up every year, and how many of us really know what happened.  I know that I was surprised when I found out what the amendments really said and that initially there was no change until the states made the use, sale or transportation of "intoxicating" beverages legal.

First of all lets look at the "origin of prohibition", the 18th Amendment, then the 21st Amendment that "ended Prohibition".es is hereby repealed.

SECTION 1. After one year from the ratification of this article the manufacture, sale, or transportation of intoxicating liquors within, the importation thereof into, or the exportation thereof from the United States and all territory subject to the jurisdiction thereof for beverage purposes is hereby prohibited.
SECTION 2. The Congress and the several States shall have concurrent power to enforce this article by appropriate legislation.
SECTION 3. This article shall be inoperative unless it shall have been ratified as an amendment to the Constitution by the legislatures of the several States, as provided in the Constitution, within seven years from the date of the submission hereof to the States by the Congress.

SECTION 1. The eighteenth article of amendment to the Constitution of the United States is hereby repealed.
SECTION 2. The transportation or importation into any State, Territory, or possession of the United States for delivery or use there in of intoxicating liquors, in violation of the laws thereof, is hereby prohibited.
SECTION 3. This article shall be inoperative unless it shall have been ratified as an amendment to the Constitution by conventions in the several States, as provided in the Constitution, within seven years from the date of the submission hereof to the States by the Congress.

On February 20, 1933 Congress proposed the 21st Amendment.  Then on April 10th, 1933 Michigan became the first to ratify the amendment and on December 5, 1933 Ohio,Pennsylvania and Utah were the last three to ratify the amendment giving it the 36 states necessary to complete the ratification and making it a part of the Constitution of the United States.

Freedom to use, manufacture, sell or transport intoxicating beverages wasn't here yet. The second section bans the importation of alcohol in violation of state or territorial law. This has been interpreted to give states essentially absolute control over intoxicating beverages.   Many of the states still remained "dry" long after its ratification. The state of Mississippi was the last to allow the sale of intoxicating beverages.  Even today the states delegate the authority over alcohol granted to them by the 21st Amendment to their municipalities or counties (or both), which has led to many lawsuits over First Amendment rights when local governments have tried to revoke liquor licences and permits.

Today is definitily a day of celebration for Americans that enjoy a cocktail or 15 in the case of Ernest Hemingway and others I'm sure.   Enjoy your day and celebrate in an appropriate and responsible way, Cheers!!!!  ;o)

Posted by Bahama Bob's Rumstyles at 6:17 AM No comments: