Key West presented an ideal situation for the lure of rum running in the late 1920's.  There were few legitimate jobs and fewer industries that were operating successfully during the era.  The operation of a speakeasy was one of the few profitable businesses during the era.     One such out of work man was Raul Vasquez, he set out to be a supplier of the needs of residents and tourists alike in a wide open Key West.   Raul had a small boat with a pretty good motor and had been on the sea off of the coast of Key West many times before.

Raul, who came to Key West with his parents when a child, learned the trade of "cigar selector" and worked at it for a number of years at the Gato factory.   With the closing of the factory his need to provide for his family in a seriously depressed Key West led him to Rumrunning and turning his house into a speakeasy.    His first trip that he anticipated  a day and a night to accomplish took him a couple of weeks and provided him with several of perilous moments.   The house still exists at 1117 Duval Street and is still a bar that is part of a bed and breakfast.
There were a lot of people that were involved in the illicit movement and sales of liquor during the prohibition era.   The sales, supply, and distribution of liquor was the only really profitable business on the island during the era.    There were "outlaws that would hijack the loads of rum that was being smuggled in as well.  One such group known as the "Pelicans" were one of the most active during the era.   This group would watch at night as the runners would stash their cargo and come in behind them and steal their load.

Joe Russell was another of the enterprising individuals who operated illegal speakeasies. Even Ernest Hemingway, who made Key West his home at the time, slipped over to Russell’s on occasion to buy illicit bottles of Scotch, and the two struck up an enduring friendship.   Joe and Hemingway would take numerous trips together on his boat the "Anita" to Havana for fishing and to party in Havana.   Who knows what they brought back with them besides the fish? 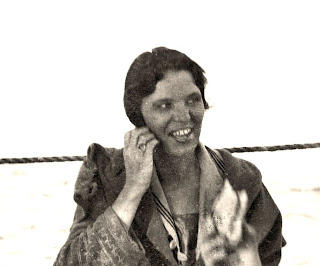 There were not only men involved in the trade of rum running in and around Key West.  There were many women involved as well.   One of the most notorious of the women was Marie Waite, "Spanish Marie", She became the heir to the business when her husband Charlie Waite was found on the shores of Key Biscayne in 1926.    Her business was based in Havana where she ruthlessly ran a small rum running empire.     She had the fastest contact boats of the era and delivered rum from Key West to Palm Beach.     A really formidable opponent, she would use any means at her disposal to oppose those who would tamper with her rumrunning.  Her empire came crashing down when she and her crew were arrested on March 12, 1928 off loading liquor from her boat "Kid Boots" in Coconut Grove.  She made bail and then disappeared and was never seen again.

These were tough times in Key West and the the rest of the country.  The noble experiment that nearly brought the country to its knees, made "outlaws" out of everyday people, some of whom became very famous.   Key West still to this day shows many of the signs of that era and it's colorful history.  ;o)


Posted by Bahama Bob's Rumstyles at 9:19 AM